Good Information on Sugary Beverage Tax Effects from the BMJ

Cultural messaging and advertising have a huge impact on health behaviors, which explains why we have an obesity crisis on our hands. As health professionals, we are interested in how to gather tools that lead to improved health behaviors. Here is some clear evidence that taxation has a significant impact on purchasing behavior. Few would argue that cigarette taxes are inappropriate, given that smoking causes cancer and cardiovascular disease—two of our most common chronic diseases—in addition to a burden of pollution. We know that sugary beverages alarmingly contribute to obesity and diabetes and their attendant co-morbidities, a cost society must bear.

We must think of soda driven obesity as a global epidemic.

I was fascinated to learn about Mexico’s soda tax at AIHM’s Annual Conference, People, Planet, Purpose: Global Practitioners United in Health & Healing last fall from Harold Goldstein, DrPH, and Roberto Vargas, MPH. Mexico has nearly the highest soda consumption in the world, with obesity and diabetes rates similar to those in the US. The BMJ recently published an open access article by M Arantxa Colchero, Barry M Popkin, Juan A Rivera and Shu Wen Ng, describing the program. The researchers sought to answer the question of whether imposing a soda tax would decrease soda consumption across socioeconomic populations over a three year period.

The results: Soda purchasing decreased among all socioeconomic groups, with the most significant declines noted in lower socioeconomic levels. By the end of 2014, the lowest socioeconomic sector had reduced taxed soda consumption by 17%. This is significant, as minorities are heavily targeted by the soda industry. Compared with pre-tax trends, the purchase of non-taxed beverages increased 4%, mostly owing to the purchase of bottled water. (Bottled water is a topic for another President’s Choice, but importantly, the safety of drinking water across Mexico is reported to be inconsistent).

Cultural messaging and advertising have a huge impact on health behaviors, which explains why we have an obesity crisis on our hands.

The soda industry is fond of emphasizing that exercise is an effective counterbalance to how many calories we consume, suggesting that an active lifestyle is the solution. However, diet quality is quite clearly a more important contributor to obesity, and it is misleading to suggest that exercise an adequate antidote to a terrible diet. In other words, looking at food and its effects from a strictly caloric perspective is just plain wrong.The Mexico study galvanized Berkley policy makers and the public health community in Berkley to became the first city to impose a soda tax of 20%. It will be interesting to explore the results of those outcome studies when they are released. It’s impressive to me that Mexico as an entire country implemented the soda tax as a public health effort.

In Minnesota, the AIHM has joined with community and health professional organizations such as the American Academy of Pediatrics, the MN Association of Family Physicians, and the American Heart Association to endorse the very successful Commons Health Hospital Challenge, which asks providers and citizens to encourage their hospitals to voluntarily phase-out the sale of sugary beverages. More than 1/3 of all Minnesota hospitals (by total patient-day) are now voluntarily sugary-beverage free. 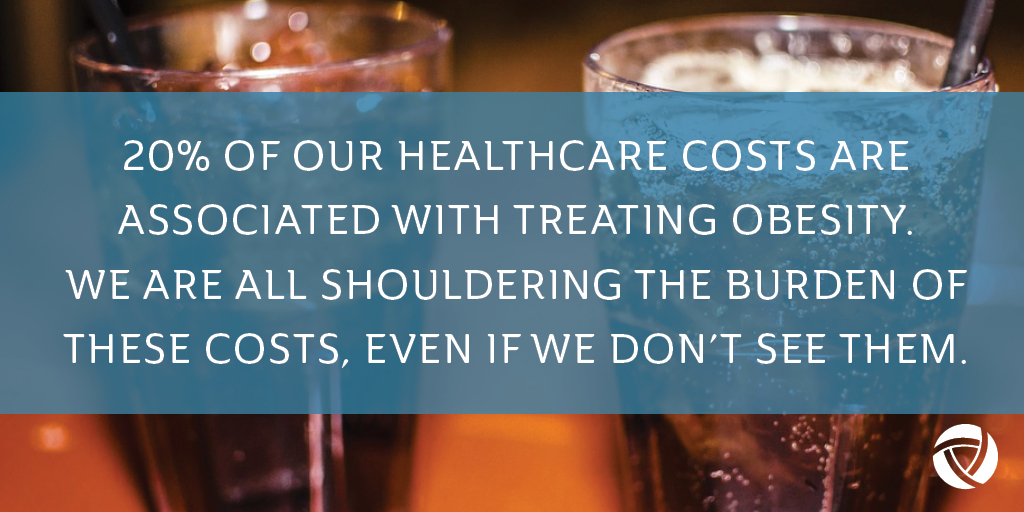 I leave you with the reminder that 20% of our healthcare costs are associated with treating obesity. To extrapolate, in a city of 100,000, that amounts to a cost of roughly $140 million dollars annually, which is actually nearly twice the annual budget of many cities. We are all shouldering the burden of these costs, even if we don’t see them. Of course, taxation is only one tool we as communities can use to tackle the pervasive problem of obesity and its effects; many others should be investigated and offered, such as labelling, incentivizing, and novel educational efforts. This is one of those “It takes a village” scenarios that requires grass roots efforts and a mindset that we must all be part of the solution.

The Academy of Integrative Health and Medicine (AIHM) Journal Club has selections of clinical medical results, advances in integrative health care, and more. AIHM President, Mimi Guarneri, MD, FACC, ABOIM, shares curated selections. This series is called The President’s Choice. It is tradition of the American Board of Integrative Holistic Medicine (ABIHM) that has been carried over as an AIHM member benefit.  The President’s Choice selections on MimiGuarneriMD.com will post several weeks after the original articles appear on AIHM.org/PresidentsChoice.

The AIHM Committee on Publications supports the journal club’s editorial independence. The Journal Club also provides editorial support for the AIHM fellowship and AIHM educational offerings. You are invited to join the AIHM and bookmark the AIHM Journal Club Index. To view the extensive list of posted articles, go to the AIHM website:  https://www.aihm.org/about/journal-club/